The Strip District’s history is a living history and the legacy of the neighborhood’s past is seen in great buildings such as the Pittsburgh Opera‘s building which was George Westinghouse’s Air Brake Factory built-in 1869 and the Cork Factory Lofts built-in 1901 which were the Armstrong Cork Factory. The history of the Strip is even more alive in the wholesale and retail stores including those that have been in operation for over 100 years such as the Pennsylvania Macaroni Company which began operations 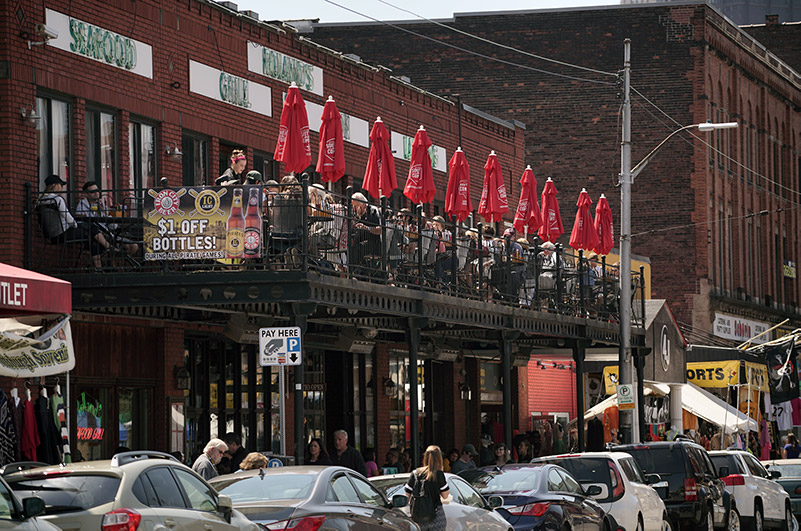 In 1814 property owners James O’Hara and George A. Bayard established a plan of lots encompassing the area now between 11th and 15th streets. Although officially named the “Northern Liberties of Pittsburgh,” the area was commonly known as Bayardstown. In 1837 the Northern Liberties joined the city as Pittsburgh’s Fifth Ward, the first addition to the city’s original four wards.

Throughout the 19th century, the Strip’s location and access to transportation made it ideal for industrial development. As early as the 1820s and 1830s, the Strip District was home to iron mills, foundries and glass factories. After the Civil War, industrial development flourished and new construction continued to move east, with factories lining the Allegheny River. The Strip District was the scene for a number of significant industrial “firsts.” Andrew Carnegie got his start in the iron and steel industries with the Upper and Lower Union Mills on Smallman and 33rd streets.

The Pittsburgh Reduction Company, later ALCOA, began commercial production of aluminum in the 3200 block of Smallman Street. George Westinghouse built his first factory to produce air brakes in the 2400 block of Liberty Avenue.

THE STRIP IS WHOLESALE

In the late 19th century, wholesale produce merchants began locating downtown along Liberty Avenue in the 600 to 900 blocks. Railroad tracks ran down Liberty Avenue. Trains stopped on the street and produce was unloaded directly into the warehouses. When plans were announced that the railroad tracks would be removed from Liberty Avenue downtown (this finally occurred in 1906), produce merchants began to move to the Strip District near the Pennsylvania Railroad yards.

The produce station was located in a small triangular building at 21st Street near Smallman Street. In the early 20th century, this intersection became the hub of the wholesale produce business in Pittsburgh. From the turn of the century through the 1920s, industrial buildings, shops, and homes along Smallman between 16th and 21st streets were demolished for the construction of produce warehouses and offices. Auction houses and large wholesalers lined up along Smallman; smaller dealers set up shops on Penn Avenue in existing retail buildings.

The 1920s were a time of prosperity, and grocery store chains began on a small-scale and helped increase the volume of business in the Strip District. Produce merchants faced difficult times in the 1930s. The Depression and the flood that hit Pittsburgh on St. Patrick’s Day in 1936 caused tremendous losses throughout the business. Just as the wholesalers were beginning to pull out of the Depression, World War II brought about short supplies of food, rationing and price freezes.

The post-war years brought two major changes to the produce industry. Trucks began to replace railroads as the preferred method of transportation, and grocery store chains continued to grow, putting small independent stores out of business and cutting out wholesalers by purchasing directly from growers. This put a double squeeze on wholesale merchants who lost both large and small customers.

In the 1950s there were 71 wholesale produce dealers in the Strip District. By the 1970s there were about two dozen dealers left in the produce terminal. Remaining dealers began to expand their businesses by opening retail stores on Penn Avenue and Smallman Street.

THE STRIP DISTRICT: AN INTERNATIONAL DESTINATION

Over the past 20 years the Strip District has truly become an international destination with not only Italian, Greek, and other European immigrants opening their businesses here but it’s become the home to Asian, Middle Eastern, African, Mexican, Caribbean, Central American, and South American businesses as well. The Strip District is not only home to businesses selling products from around the globe but it’s also increasingly home to businesses selling goods made in the greater Pittsburgh area and has truly become an international destination. Everyone from foreign diplomats to travel bloggers love to visit the Strip District and we love to welcome them.

The Strip District is in a period of transition but those who know and love this neighborhood know that it always is and always has been. We’re excited for what the future will bring and we can’t wait to help write the next chapter in the Strip District’s story.

Some Text courtesy the Historical Society of Western Pennsylvania.